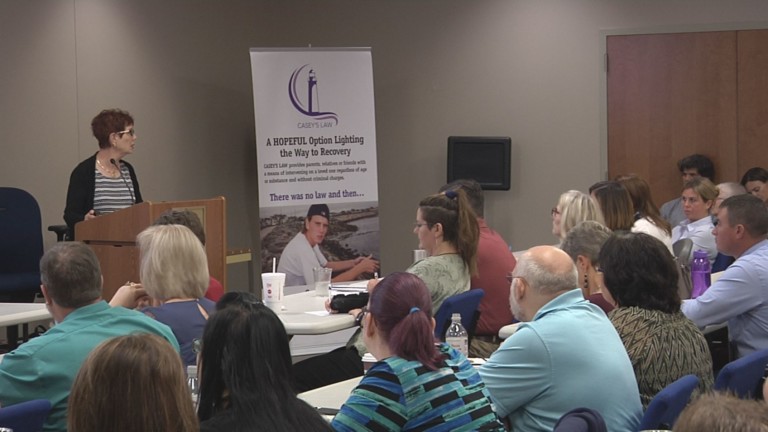 The story of how Casey’s Law was born

The story of how Casey’s Law was born. “My son died of a drug overdose – and it didn’t have to happen.” That thought is what pushed Charlotte Wethington to action and what still drives her today. Wethington’s son Casey was an energetic young man who enjoyed life until it was taken by drugs. As a boy, he participated in a variety of sports and enjoyed collecting baseball cards, playing video games and other activities that young boys and girls like doing. All of that changed in his late teens when he just ‘didn’t know’ what he liked to do to have fun anymore and turned to drugs.

Casey’s upbringing with a loving family and all the advantages of a middle-class life did not matter in the least when it came to the disease of addiction. He never intended to become addicted when he tried drugs for the first time but what he didn’t realize was that his drug use would progress from abuse to dependence to addiction and ultimately to his death. By his early 20’s his parents became aware of his addiction and it’s seriousness. However, even though his addiction was clearly driving his decisions, Casey was expected to respond as a normal, healthy young adult and choose treatment for himself. A parental intervention was not only discouraged but also denied. Time after time, Casey’s mother begged recovery centers and courts to allow her to intervene and get her son into treatment. However, Casey was an adult, and there was no legal course of action.  At 23, Casey Wethington died of a drug overdose. After her son’s death, Wethington decided to act and Casey’s Law was born. The Matthew Casey Wethington Act for Substance Abuse Intervention became a law on April 9, 2004, and went into effect on July 13, 2004.

This act provides a means for parents and others to intervene when their adult child or loved one is unable to recognize a need for substance abuse treatment. It allows parents and relatives to petition the court to order involuntary treatment for the person who is substance abuse impaired. It may seem extreme to force someone into drug treatment. Some even believe it may not be effective, thinking the person has to “want help” to be successful in treatment. However, denial and distorted thinking by those with addiction generally impede their ability to make rational decisions, which leads to a small number of people who seek treatment on their own. Most individuals who are substance abuse impaired don’t “choose” recovery but instead receive court-ordered treatment usually after being arrested for a crime. Addiction and crime often go hand-in-hand because those who are addicted are a slave to their disease and resort to any means necessary to procure their drug. Court-ordered treatment can be effective regardless of who initiates it and it would be difficult to argue that treatment should only be court-ordered after a crime was committed when the same court could order treatment before a law was broken.

Gretchen Roof, vice-president of clinical services for Four Rivers Behavioral Health said, “Casey’s life as truly been a life-saver. I mean that literally.” She continued, “Since Casey’s law was enacted, we have seen dozens of clients come to treatment through our outpatient services, as well as our residential programs at CenterPoint and at the Fuller Center in Mayfield.”

Tyler Durham came to CenterPoint a few weeks ago. He didn’t choose to seek treatment. Tyler was sent to treatment by the court system after a loved one intervened using Casey’s Law. After just a few short weeks, Durham credits his family and the law with saving his lives.

Durham said, “I sure wouldn’t have come on my own. And, if I hadn’t gotten help when I did, I would be dead. It’s that simple.” Durham’s story is much like Casey’s and since being in treatment, he has learned about Casey and the law that was used to help him when he couldn’t help himself. Durham praised his family, “I am so grateful to my family. They knew I was in trouble and they cared enough to get me help. What I’m most grateful for though, is that a few years ago they couldn’t have gotten me the help I needed. This law allowed them to do it and I am thankful that Ms. Wethington fought in remembrance of her son to make the law.”

To learn more about Casey’s Law go to https://caseyslaw.org/